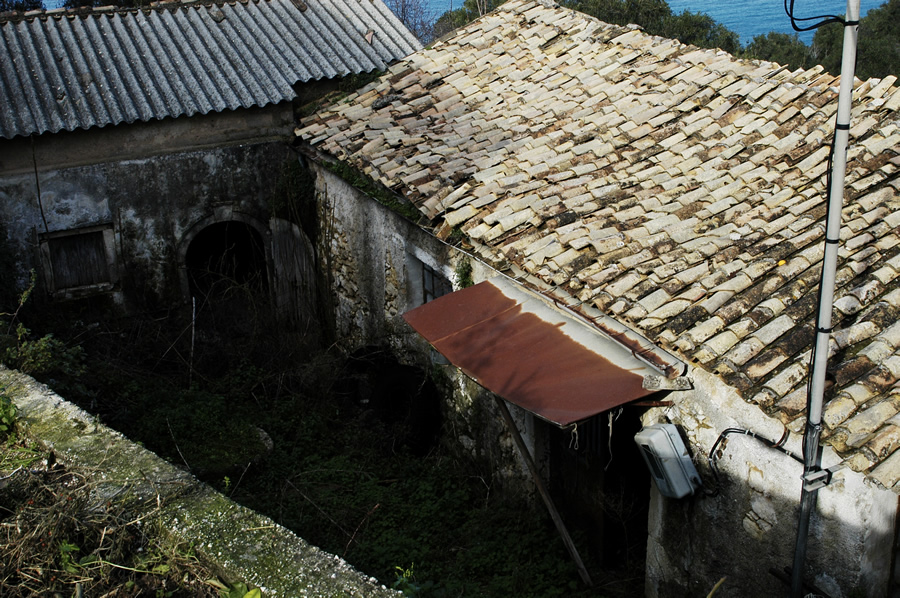 Pentati is situated in the northern part of the municipality of Meliteieon. For centuries,  this part of Corfu was known for its wonderful vineyards and the production of quality wines. The stone terraces where the vines grew can be seen stretching up the mountain side but have now been overtaken by olive trees.

Today, the village largely retains its traditional character. From the courtyard of the church of the Blessed Virgin Odigitria (built in 1845) you can admire the sea and experience unforgettable sunsets.

Approximately 1.5 km from the village is the district of Paramona where the family of the composer Nicholas Mantzaros - who famously wrote  the music for the Greek  National Anthem - had a farm with farmhouse, the ruins of which have survived.

But what determined the location selected to create a settlement  here all those years ago? There were two - water and security.

Natural springs supplied the village with fresh water but dangerous exposure to pirates for hundreds of years could only be solved by moving the village higher up the mountain, away from its small harbour. That's why all the villages in western and southern Corfu are located away from the sea and built either on hills (Vouniatades - Vragkaniotika - Hlomotiana - Episkopiana) or at altitude (Pavliana - Agios Dimitris - Chlomos).

Pentati  is the youngest village in the area and was established in the second half of the 16th century, during the years of Venetian rule .

For many centuries, Pentati was celebrated for the oak trees that grew in abundance on the hills above the village. Acorns were of particular economic importance, not least to feed to pigs. In some parts of Greece the people made bread and pies from the kernels. During the First World War - especially in 1917 when the crops failed - many housewives mixed ground acorns with a little corn to make a kind of bread.  The cup of the acorn was used to make dye for colouring cloth and also in tanning. The wood itself was essential for woodworking and shipbuilding and a valuable source of income for the village.

Sadly, there are few oak trees left in this part of the island now.

The name  ‘Pentati’  itself derives from the tax the Venetians imposed on the acorn-gatherers whose acorns were exported to Venice and Marseilles and used to produce dyes for sale in Algeria and Tunisia. During 18th-19th century the ports of the Peloponnese – including Pentati - exported more than 1,500,000 acorns each year to Marseilles

Today Pentati is a bustling little fishing village that supplies fresh fish daily to the restaurants and tavernas in the nearby holiday resort of Agios Gordios and also to the famous Corfu Town market.